Will Winter Ever End?

Very little to report this month I'm afraid. The coldest March on record for over fifty years meant any plans I had for a good end to the river season were abandoned and any sea fishing trips I had wanted to do were put off, opting instead to stay in and keep warm, rather than brave the biting easterly winds blowing outside. A trip to the River Kennet saw me catch a few grayling, dace and trout. Besides that, the only fish I've seen have been behind glass in the Bristol Aquarium. If like me you've not done much fishing of late and are perhaps beginning to forget what fish look like? Then it's well worth a visit. Go to www.bristolaquarium.co.uk for information. My plan for April is to catch a species of sea fish that I've not previously caught. Until the weather gets a little warmer though, you're much more likely to find me holding a television remote and PS3 controller, than you are a rod and reel!
Posted by Cadbury Angling at 08:37 No comments:

Email ThisBlogThis!Share to TwitterShare to FacebookShare to Pinterest
Labels: Posted by Jon

I had been recommended by a number of our customers to try the fly fishing at Hawkridge Reservoir, a forty five acre water on the outskirts of Bridgwater, near the village of Spaxton. So, with some damsel patterns I had recently tied, I set off on Tuesday, arriving at the water late morning. There were a few boats out and some bank anglers in front of the lodge, two of whom hooked fish before I had even set up. Not wanting to catch my five fish limit too quickly, I tackled up a 9' 5# rod, a slow intermediate line with one of my flies and set off for the far end, leaving the lodge bank well alone. Just passed some trees, a small bay shielded from the worst of the wind, with a drop off to deeper water appealed. I waded out, cast a fly, counting down ten seconds and I was into my first Hawkridge rainbow after only a few casts. A second fish followed soon after the first and I then set off to explore more of the reservoir. Trying various spots and flies until late afternoon saw me catch my limit with the green and black damsel and dancer combination proving to be the best pattern on the day. Great success for my own flies and an enjoyable day on a new venue that I am keen to revisit. For information on Hawkridge Reservoir visit www.wessexwater.co.uk

Posted by Cadbury Angling at 09:27 No comments:


The last of the planned Silverfish Only matches was once again well attended, with 17 anglers booked in, most of whom also indulged themselves in a tasty breakfast at Plantations Cafe.

To the draw, I had drawn 11, which has one of these silverfish matches back in February. The 'form' pegs of 4,5 and 7 had also been highlighted as ones to watch. Steve Mayo drew 5 and Andy Hembrow drew 7, good anglers on good pegs was sure to produce a weight to bother the scorers.

I was happy with my draw and was pleased to have Simon 'Skimmer' Carvallo next to me in peg 12, as least if it went quiet I had a mate to chat to!

I went with the 'in' tactic of cupping loose groundbait on two 13m lines, with the option of fishing 14.5 past my feed if I needed to.

The previous night I mixed my groundbait of a 50/50 mix comprising of Sensas Lake and Crazybait Gold. I cupped in 3 cups on my left 13m line and 2 cups on my right 13m line, each cup had a pinch of caster and pinkie in, some finely chopped worm on my short edge line and a cup of groundbait with some caster on my 6m line. I kept hooking roach off both my 13m lines but the bites were coming slow and steady, not what I really wanted. I persisted and nothing but small roach.

After the first hour I had a look on my top kit edge line, I had continuously fed with pinches of caster and pinkie, I had bites straight away, a small perch, followed by a decent 8oz perch and then an 8oz roach, then the line died, only the odd small roach....so I topped up my 13m lines and headed back out over them.

I had to wait just a few minutes for a proper lift bite and a decent 1.5lb skimmer came to the net. 10 minutes later another, this time slightly smaller.

All the white Simon to my left was building a decent weight of smaller skimmers, catching them regularly throughout the day on his longer lines.

We had heard on the lake grapevine and Andy Hembrow in peg 7 was bagging up so everyone else was fishing for the rest of the places.

As the day went on the bites gradually dried up for everyone it seemed, the lake just seemed to flop. I was lucky enough to have a 1lb crucian to break up the afternoon of small roach catching.

I ended up 5th on the day with 10lb 8oz, I days fishing was had but not enough to get in on the money!

Rob Fogg in peg 18 was having a hard day which was topped off by a Canada Goose fling through his top kit and breaking the tip! Speaking of breakages, Lewis Walker, after recently converting to Daiwa poles from Maver, decided to loose feed his entire pole at 11.5m after his 13m section broke, we all heard it, like a shotgun going off!


Down to the facts:


Despite living close to Barrow Tanks for nine years now, I had never fished there, until this Tuesday. I woke to a bright frosty morning and was soon on the bank. Two of the three bowl shaped reservoirs were fishable, the third currently out of bounds, due to building work. I set up a 10' 6# rod with a die 5 sinking line, a booby and a blob were selected to start with. Experience has taught me that in these bright conditions the fish would likely be staying well down and so I spent the morning allowing my flies to sink deep in search of the recently introduced rainbows. Unfortunately, come midday, I was fishless. A change was needed and so I swapped to a midge tip and buzzers. A couple more hours past, still no fish, not a bite. As a few clouds appeared and the sun started to sink in the sky I felt hopeful of a fish. Switching to a fast glass line and an orange blob I headed to deep water. I was soon in to a trout of about 1lb and two more followed quickly, the biggest, just shy of 3lb. By this time the temperature was dropping and the fish switched off as quickly as they had switched on. Time to go home, feeling pleased to have had a few fish in difficult conditions, from a venue I'd not previously fished. For more information on Barrow Tanks visit www.bristolwater.co.uk 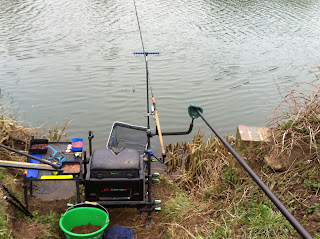 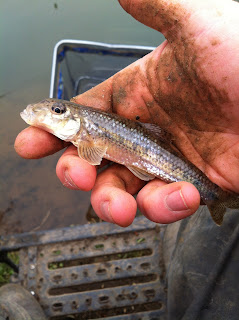 Posted by Cadbury Angling at 04:55 No comments: