I was lucky enough to be invited to fish the South West Trade Match, which is a yearly event organised by Mark Harper of Preston Innovations and Dave Drake from Drennan International.

These matches have taken place for 25 consecutive years, which is a credit to the men organising the event and the tackle dealers in the region who attend them.

This year we were fortunate to have Shearwater Lake, part of the Longleat Estate as our venue.

Draw and breakfast took place just down the road at the George Inn, fishing was 10.30am-3.30pm.

Simple rules to keep to, no spodding, no zig rigs, no floating baits, so essentially, conventional feeder tactics.

I drew peg 8 on the road bank, which was roughly a third of the way up from the dam wall. I had a plan of fishing the method feeder at range over a bed of bait and an option to fish passed the bait on a distance setup.

Bait for match was to be micro pellet and corn as the loose feed which would be fed via a large 'bait-up' style feeder as an initial and top-up feed. Baittech Karma on the method and damp micro as an alternative (which I didn't use).

Hookbaits would consist of dead red maggot and a range of the new Mainline Match 8mm dumbell wafters.


To enable me to fish on my bait accurately and if need be, short or past my bait I used the 'carpy' technique of wrapping stick to measure my distance and allow to fish any rod I had with me and the selected distance.

I had a plan to fish beyond the anglers around me and try and intercept fish that could be patrolling further out.

The green algae bloom which greeted us at the lake was going to hamper fishing and the lack of small fish activity proved that.

At the whistle I began with 8 large feeders full of the micro and corn mix. Then loaded the large Drennan Method with Baittech Karma and a squirt of Korda Goo and out it went. 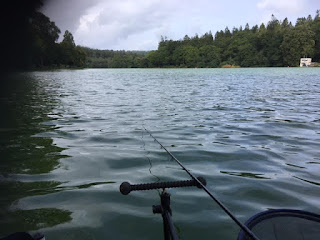 I was looking to re-cast every 5 minutes on this line to keep bait going in and to hopefully attract fish to the 'plop' of the feeder.

After a few casts I have a firm pull round on the tip and was into a decent skimmer, safely in the net and back out went the feeder. I continued for the first two hours of the match to regularly get bites, rotating hookbaits all the time and topping up the loose feed after an hour when the bites slowed.

The following two hours of the match went very slowly for me, a few fish was getting caught around me, Andy Lloyd two pegs up from me was catching well and I thought with my slow middle of the match he had edged ahead after going 'fish-for-fish' at the start with him.

In the last hour I caught a few fish on the long rod then back on the main area and just short of it also, kept rotating hookbaits and distance to try and winkle out a few extra fish.

When the scales came down to me I could see my section had a 95lb weight (overall winner) and a 68lb (overall 4rd). There was also a guy who fished with new Drennan Acolyte whip and caught 47lb of roach.

My fish went 46lb 6oz for overall 9/10th, I believe, the far bank and dam wall fished very hard, Mark Harper who was opposite myself, had looked very busy though the match and he finished with 73lb 4oz for 3rd in the match.
My good friend, Kev Hewitt was pegged next to Mark. I had called him a few times during the day and he told me he was struggling on the bream front but had a couple of carp, one ended up tipping the scales to 22lb! Kev finished on 66lb for 5th overall and picked up his section money by default.


We all headed back to the pub for sandwiches and results:

Hopefully I will get an invite back again next year and as with previous years the venue will be rotated so we could be at Todber, Viaduct or Witherington Farm.
Posted by Cadbury Angling at 01:03 1 comment: