Onto the last venue for the 2103 South West Super League, the Bristol Avon. We were fishing the Newbirdge section where the league is usually staged.

The river hasn't seen much water in recent weeks and although there has been some good winning weights, we were all a bit apprehensive on what the day would have in store for us as a team.


The draw was made and I was given 128 which was at the top of my section, just down stream of the rugby club. Not a bad area but probably not a match winning bream weight to be had!! 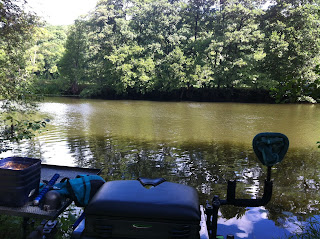 My peg was quite high off the water and set back so I decided to fish 13m to find a good depth of water to enable me to trot the pole properly.

I setup two top 5's, both with long lines above the floats. I had a 1.5g rig for running through off the bottom and a 3g rig for dead depth.

I also setup up a feeder rod for 2/3rd's of the way across.

I would say for anyone looking to mixed large quantities of groundbait a whisk and cordless drill is essential, it saves so much time and effort! I split my mix over two buckets to ease the strain on my drill. 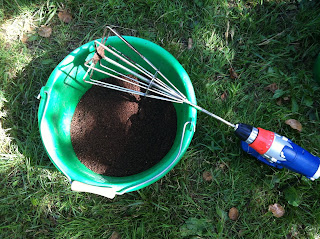 On the 'all in' I balled in 10 large balls on my mix, the last 4 having a good pinch on casters in each ball.

I settled down and began with the 3g rig and immediately realised the flow was even slower than I had anticipated, it was tripping through very slowly, after 3 or 4 runs I got my first roach, then after a few more runs another, this continued for the first hour and I ended up with 17 roach and a perch. I kept catapulting a pinch of hemp and a pinch of caster every few minutes over my pole line and a few balls of groundbait towards my feeder line.

After one and a half hours my pole line really dried up so I switched to the feeder. A few casts later and a small skimmer graced the net...was this the start of something really good..........NO! I was getting quick positive bits on the tip on double worm but they were all tiny skimmers!!! I fished this line for a couple of hours and picked up fish steadily, still nothing massive!

I repeatedly catapulted small balls of groundbait over my feeder line, heavily laced with chopped worm.

With two hours to go I opted to top up my pole line, so in went 6 large balls of my mix each packed with casters.

With 30 minutes to go I had a look over my pole line and got bites instantly, a hybrid of 1lb plus several good roach.

At he end of the 5 hours I ended up with 6lb 8oz of mainly roach and small skimmers plus a few perch, this was only good enough for 6th in my section and 3 points. My section was won by Mark Bromsgrove of Sensas Thyers, lower down in my section where there had been some very decent weights caught on the pole.

The team had produced a solid performance, mustering 3 points of the day, the main highlight was Sam Johnson, who again came up trumps with an impressive 2nd in section, the man is proving he is in top form this season!!!

Posted by Cadbury Angling at 02:04