Autumn Barbel (..and Carp) Trip to the Biblins, River Wye

A very wet day was forecast for Thursday but after viewing the Wye and Usk website and looking at the webcams my friend James Marlow and I decided to fish the popular Biblins stretch of the River Wye.

After obtaining our day tickets from Forest Tackle in Lydney we headed down to the river to find it at a good fishable level with a healthy amount of colour in it. Despite the heavy rain the river wasn't pushing through too hard and we expected 2oz feeders to be plenty heavy enough to hold bottom.

We settled on a large double swim down stream and set about tackling up for the day ahead. James and I both opted for 2oz Korum open ended feeders, fished on a Fox run ring system in conjunction with a 10" Korda N-Trap hooklength and at the sharp end, the ever successful Drennan Super Specialist Barbel hooks in a size 9.

We both opted for different hookbaits to try and find what would work. James went for a glugged Dynamite Baits The Source 10mm boilie and I chose a SonuBaits 12mm drilled crab pellet.

With the rods cast out James baited his left hand margin down stream ready for later on in the day.

After a few re-casts with the obligatory 25-30 minute wait for the feeders to empty my rod ripped into life, a typical vicious barbel take, stripping line off the baitrunner. There was the unmistakable 'hugging the bottom' barbel fight and after a 5-10 minute tussle the fish boiled close to the bank and as expected it was a good sized barbel. The fish made a few last lunges and then was ready for netting. 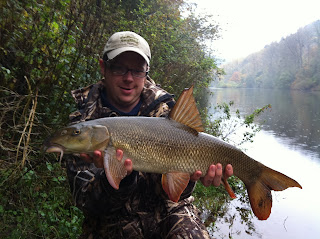 A prime example of what the River Wye has to offer, a 6lb 8oz beauty.

With this fine specimen safely returned I reloaded the feeder, re-cast to a similar spot and crossed my fingers for another take.

James had been pre-baiting his margin swim now for a couple of hours and he decided to try that area as the main body of the river had only produced the one bite between both of our rods. 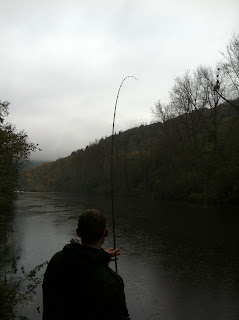 Shortly after the margin cast James' rod bent over on the rest and the baitrunner fizzed off. The fish made its way into the deep, middle of the river and made several hard runs, taking more and more line each time. James gained line back each time, only for the fish to take it back! The fish was holding deep and refusing to give up the fight.

The fish made a few deep boils and kept us in the dark as to its size. I was expecting this to be a BIG barbel!

The fish rolled on the surface and to our amazement, it was a mirror carp. A beautifully deep coloured fish weighing 12lb 8oz.
This was a shock to both of us, we knew from Dan's previous exploits on this stretch that carp reside here but the fight had seemed very 'barbel like' 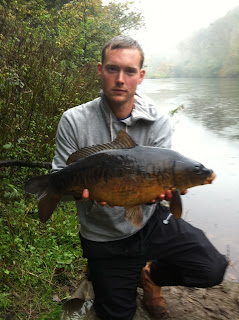 James was happy none the less with his first fish from the Wye. The fish went back without a fuss and James reloaded for another margin cast.
The day went on and we both regularly re-cast and changed hook baits, alternating between Mainline Activ8 dumbells, Dynamite Baits The Source 10mm boilies and SonuBaits 12mm crab pellets.

We did lose a few set-ups to snags but kept re-baiting and re-casting, exploring the far margins and mid river in the pursuit of another bite, but sadly without any joy.
We moved up stream with the hopes of finding some more fish but with darkness upon us we had to call it a day.
In the cold, wet conditions we were pleased with a fish each and with our days efforts so we will most definitely be back to try our luck again.
Tight lines for now! Toby
Posted by Cadbury Angling at 03:34